A summer program at Rice tailored to girls who will take high school physics in the fall strives to empower them to be successful in science, technology, engineering and mathematics (STEM). The two-week camp, called Design Connect Create, introduces students to basic physics concepts, provides interactive team modules and features female STEM professionals as speakers. 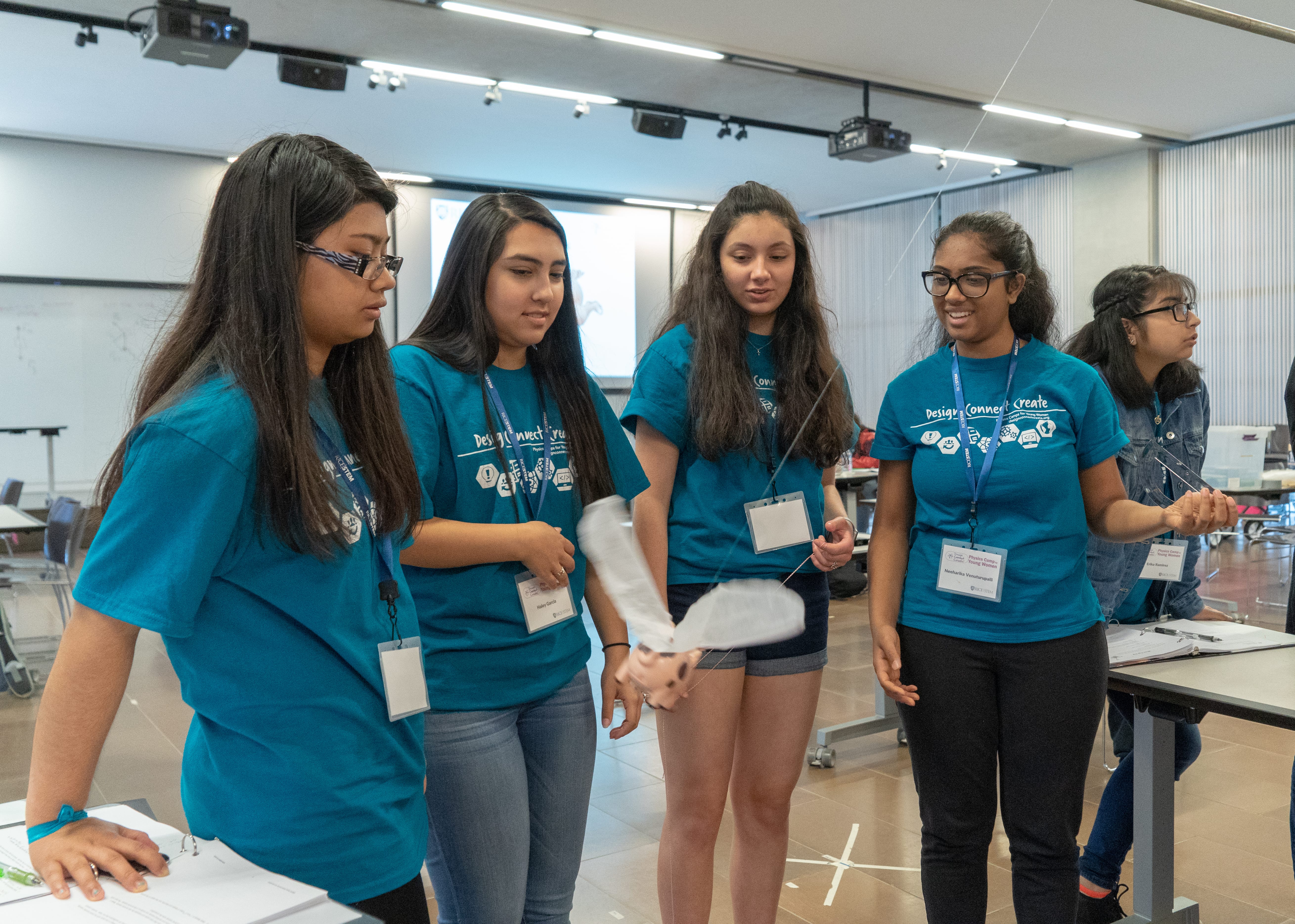 “Physics is one of those barriers to STEM, because there are a lot of options for girls and they are often not encouraged to take physics,” said Carolyn Nichol, director of Rice’s Office of STEM Engagement (R-STEM), which organizes the camp. “I was the only girl in my high school physics class, and I was the only girl in my undergrad chemical engineering classes, so I’m really passionate about getting more women into STEM.”

The camp’s goal is to increase girls’ confidence in physics, which is a key course in determining whether they continue to pursue a STEM career. Exposing them to material in a fun, collaborative way aims to lessen apprehension and self-consciousness.

“Female science students need someone to help them see what’s on the other side,” Nichol said. “These are really rewarding careers and sometimes it’s hard to see that when you’re loaded down with a lot of difficult STEM classes.”

Research on underrepresentation of women in STEM fields has shown a lack of role models to be a major factor, which is why the program brings in a female speaker every day to talk about their pathway to STEM. At least one female Rice engineering student also works in the program on campus to serve as another role model and to answer questions and provide guidance.

“When I walk into these programs, it’s so personally rewarding, because I wish I could have had this experience when I was their age,” Nichol said. “I’m always looking for ways to make women more empowered, and having a STEM degree gives you a good income and, in some ways, a lot of power, and I want these girls to have that opportunity.”

Established by a group of women at Texas Instruments (TI) in 2003, Design Connect Create originally served students from the Dallas Independent School District (DISD). Upon early retirement, Wanda Gass ’78 was inspired to develop a scaling methodology for the program, which is now available in Houston, Austin, Dallas, Fort Worth and surrounding communities.

“We saw what an impact the program had in DISD,” said Gass, president of Design Connect Create and a retired TI Fellow. “Girls who took the course scored significantly higher on their AP physics exams compared with their peers.”

The program continues to track this data. A 2006 study including every DISD graduate revealed that girls who completed the Design Connect Create program were five times more likely to go on to obtain a science or engineering degree compared with their peers.

“We know that if they do well in physics and go on to take the exam, there is a much greater chance of them majoring in STEM,” Gass said.

The Design Connect Create program at Rice doubled in size this year, serving 60 girls and expanding into two sessions. “Growing the program allowed us to recruit from more schools in the Houston area, which was really exciting,” Nichol said.

“It’s been inspiring to see all these girls loving physics so much and it reminds me why I chose STEM,” said Raidah Ahmed, a Baker College junior who works in the program. “STEM can be very hard, so it’s important to foster young kids to actually pursue it, especially disadvantaged groups that might not get the same encouragement elsewhere. The fact that we can do this is amazing.” 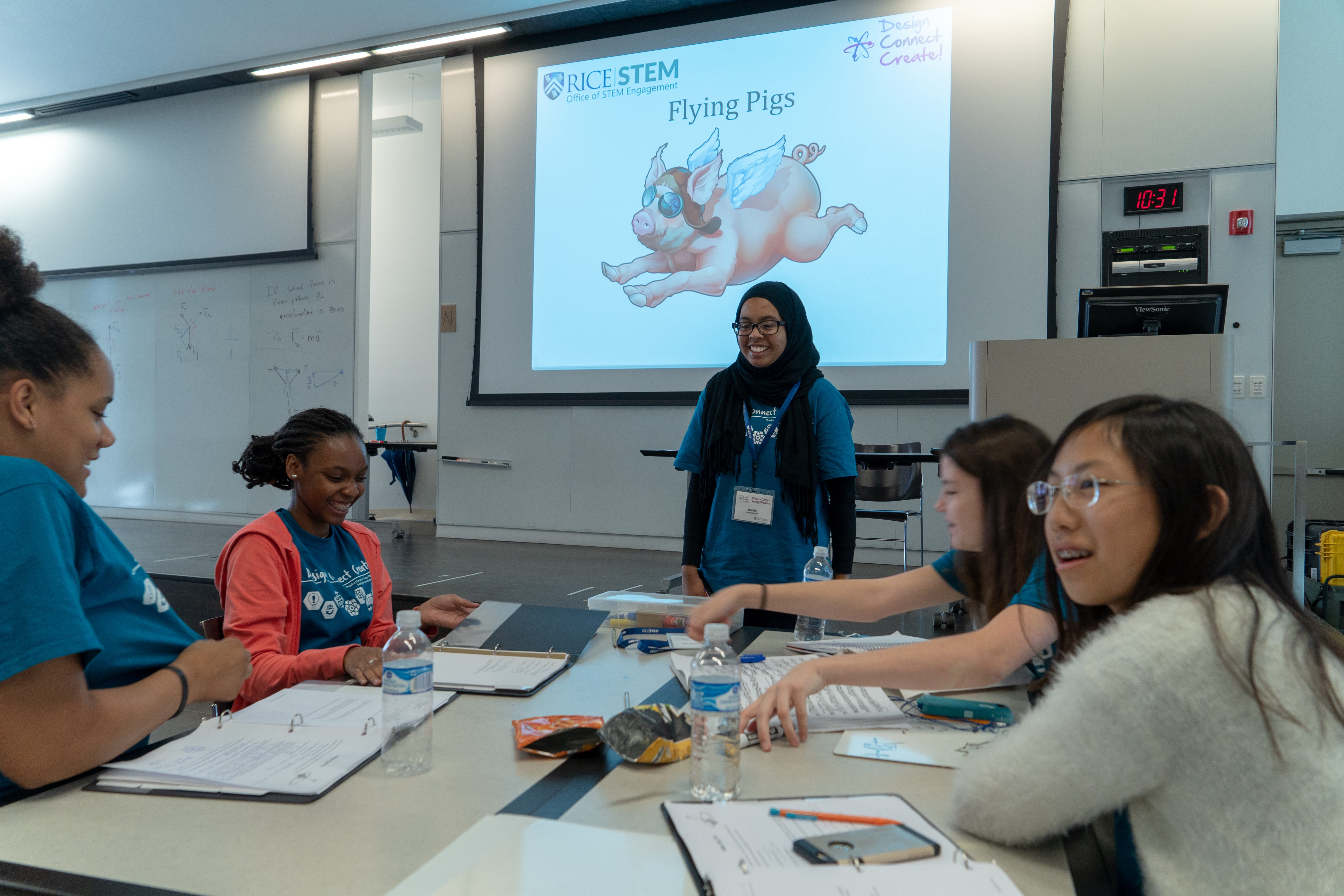 The students complete hands-on activities throughout the program, such as exploring static electricity, riding a hovercraft and making ice cream using liquid nitrogen.

“I was a little nervous about taking Advanced Placement physics next year, so I thought this camp would give me an introduction to the basics and help me feel prepared,” said Ansley Fiorito, a high school junior. “Raidah has been very open about her experience at Rice, and it’s been really motivating to see that this could be me in a few years.”

“I like learning with only girls, because we’re able to relate to each other — we have similar female experiences,” said Shyla Smith, a high school senior. “It’s fun to interact and work together as we’re all trying to become prepared for physics class.”

Gass, who worked at TI for 31 years and was elevated to Institute of Electronic and Electrical Engineers Fellow, was one of few girls in her engineering classes at Rice. She was elected a TI Fellow for her pioneering work in the development of TI’s first Digital Signal Processor and was inducted into the Women in Technology International Hall of Fame in 2003.

“When I got to TI, it became more obvious to me that being the only girl in the room was a disadvantage,” she said. “The co-workers and mentors I befriended and networked with were influential in helping me set goals and achieve more than I could have on my own. They helped me break down barriers. Roles models are a powerful way to influence someone’s decisions — where they go to college, which career they choose, etc.”

R-STEM provides a spectrum of summer programs for students and teachers, including STEM-Letics Academy, a partnership with Rice Athletics that blends STEM and athletics for elementary students, and the ConocoPhillips Rice Applied Mathematics Program, which brings 75 middle- and high-school teachers to campus to learn how to teach innovative curriculums.